Before going on with this tutorial, be sure you’ve got AWS CLI setup and you’re comfortable with stuff already covered.

Here are the previous parts in this tutorial series.

What you’ll do in this tutorial

In this tutorial, you’re going to do what we did in Part 2, but instead of doing all of the S3 configuration and creation manually in the AWS Console, you’re going to run a single command that provisions the S3 Bucket automatically. Of course, there’s a configuration file (CloudFormation template) you need for that command to do what we need it to do, but we’ll get to that.

Create a React app to deploy

As you probably guessed, we’ll quickly create an app with create-react-app.

If the setup worked, the app should open at http://localhost:3000

So, CloudFormation templates list and configure a stack of resources that can be provisioned when that template is executed/run. These templates can be written in json or yaml. We’ll use yaml.

In the root of your project, create a yaml file called cloudformation_basic.yml.

Paste the following stuff into it.

You can use the docs and comments in the gist to get a feel what’s going on, but let’s quickly walk through the main aspects of the file.

Here’s some notable syntax stuff in this template that are helpful in all templates.

Provision a bucket with the CloudFormation Template

Add this command to the scripts in your package.json, but add a unique bucket name rather than the placeholder.

Here’s a quick breakdown of the aspects of this command…

Now execute the command to create the stack specified in the template.

Once executed, you should see some output like the following.

Verify everything in AWS Console

Also, find the CloudFormation section of your AWS Console. The main page of that lists your stacks, where you should see the “basic” stack. You can click through to the details of the stack you just executed by running the provision script. 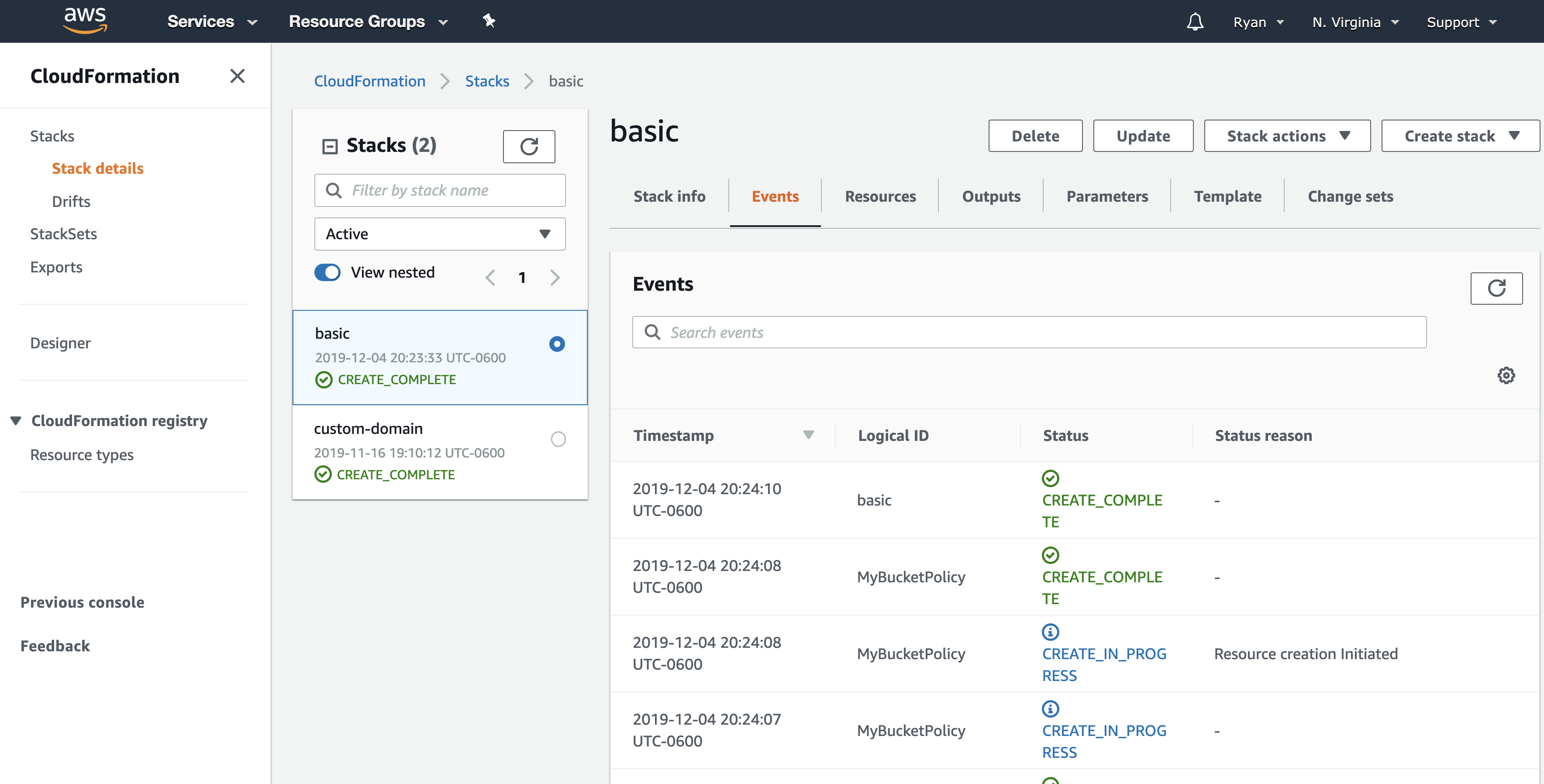 Upload the React app to your bucket

Add another script called upload, again replacing the <BUCKET_NAME> with the one you added to the provision script.

The app needs to be built for production before it can be uploaded to your bucket, so add a script that both builds then uploads your app, called deploy.

Now you can deploy your app to your S3 bucket by running the below command.

Now you can visit your bucket’s endpoint (find at AWS Console > S3 > Bucket > Properties > Static Website Hosting > Endpoint) and see the app there!

You can now host a React app in an S3 bucket and deploy it via the CLI. But that’s just the tip of the iceberg!

If you want to see a single app with all of those topics implemented, check out react-spa-starter, an open source React/Redux boilerplate I’m working on that inspired this tutorial series.

Hi, I'm Ryan. I live and work in Chicago as a Front End Engineer. I'm always working on side projects and sometimes write JavaScript-related tutorials that help folks build things, too. Follow me on Twitter